A New Addition to the Fleet

Another New Fire Engine Addition to the Fleet:
Just two weeks ago, our Village of Hope was proud to have received this second fire engine was added to our Village of Hope Fire Department which was a gift from the National Government. Also previously obtained was the all-terrain vehicle used primarily for forest fires. Most important are these men whose lives have been so dramatically changed in the Village of Hope and now serve our community providing not only firefighting services but emergency services, house inspections and community services.

A Special Recognition to the Village of Hope Fire Department:
The Fire Department and members have received multiple awards and recognitions both from the Estonian Government, Local Government, National Fire Association and more.   Here the head of the Village of Hope Fire Department Viljam Borrissenko receives from the co-founder of Village of Hope Missionary Märt Vähi a special portrait of Märt’s grandfather Mihkel Pohla, in full uniform of the volunteer firefighters brass band in the capital of Tallinn, of which he was the conductor. It is unique that today on the very property, that Märt donated to the Village of Hope, that was at one time Märt’s grandfather’s lands, today is the world’s first and only volunteer fire department that works out of a so-called “drug and alcohol rehab centre”! Both portraits will hang on the wall with various awards in the hall of our fire engines.

Burning the Remains of the Ladies Center:
As sad as the occasion was, it was a step in leaving the old behind and moving forward. The men from the Village of Hope, worked long and hard to clean up the mess left from the burned out former home of Märt, which had become the main building of the Ladies Center. During the actual fire the Village of Hope Fire Department was first on the scene and was in full operation when other fire departments arrived but alas, even at that the house was in full blaze before the firefighters even had a chance upon arrival. The huge pile of debris and burning timbers were set ablaze as part of the cleanup. HeHereby the fire is Tanker No. 1 of the Village Fire Department, on standby, along with all the men and women from the Village of Hope, who watched with mixed emotions while in attendance during the spectacular blaze. As shown last week, preparations and construction of the foundations, bridge to the new Ladies Center are underway, despite all obstacles, insurance setbacks and other challenges. All help, prayers and finances are a welcome help during this time! 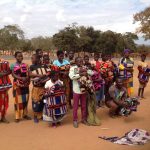 Blankets for the VulnerableGlobal Stories 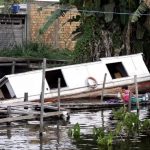