Even in her adolescent years, E.W. knew she was called to minister to the people of the world. Answering the call, E.W. has travelled across the globe, sharing the gospel wherever she goes.

E.W. has faithfully served the Lord as a global worker for ACOP Global Harvest since 1992 when she travelled to Estonia. Prior to that, she served in Mexico for over 11 years. Drawing from her extensive history and wealth of experience she continues to travel the globe, making disciples and guiding the next generation of global workers.

Initially, E.W. felt called to serve in the great white north, in fact, when she was asked what she wanted to do when she grew up her response was, “be a missionary to the Eskimos!” Well, when she discovered how cold and dark it really was up there and how the people eat raw meat, her tune quickly changed and she decided there were other countries that were better to visit.

It took some time but in 2010 the Lord pulled her back to that calling and she made the first of what would become a semi-annual trip up north to Cape Dorset, Nunavut. Twice a year she travels to Cape Dorset to minister where she has performed revival and healing meetings, where she has witnessed people receive healing, encouragement and deliverance from addiction. The second trip usually is focused on the children, organizing VBS to which numerous children attend.

In addition to Nunavut, E.W. also continues to travel to various other countries, including Cuba, Mexico, Spain and various places throughout South America and Asia. Soon she will be travelling to several places in the Middle East with a small team where she plans to minister in churches, a women’s prison and with refugee families. 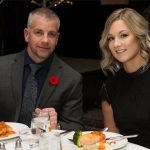