In February, Chuck & Lynn Sheridan made a trip in San Carlos Mexico to catch up with an old friend who ministers in a church of “expats” What is an expat? It is a person who has moved from North American to Mexico, an ex-patriot! San Carlos is not like any other tourist town. The tourist is rarer than the expats. Or saying it another way would be, most of the people in the country are there for at least six months. The two-week tourist is not as common as in most Mexico tourist destinations.

The expats and the local Mexican residents seem to live in a mutually dependent relationship. The two cultures do not collide but seem to complement one another. Many of the people in these two groups have long term relationships. It is not the typical two weeks or winter type of North Americans being served as a tourist by Mexicans. In San Carlos, there seems to be an actual relationship between the two groups of people and cultures working with each other.

We also visited Guaymos. It is about twenty minutes away on the highway. A city of about 250,000 people and is very Mexican. We met Devon Kehler and his wife. I walked around their mission in awe. I could hardly take in what they do! They have given their lives to feeding the children of the community 3 – 4 times a week. They teach the children, build a relationship with them and share Jesus with the whole family. Truly living out their sacrifice of life for these people around them that live in such poverty.

We saw such poverty and need for the mission for Jesus sake met by a young couple that could have an easy life in southern Manitoba. But their choice was to sacrifice for Christ in his poor community.

We also visited an orphanage. I wasn’t two minutes in the door and a little girl of about two wanted me to pick her up. She fell asleep in my arms. That doesn’t happen often. This place is operated by a woman named Maggie. She is a Mexican American who looks after 44 or so children from a few months old to 17 years old. She operates this without government money and takes in every child brought to her home.

We have so much here, and there is such a need there. What an opportunity to be Jesus with the skin on. I am compelled to do more!!

I’m Afraid of My DadGlobal Stories 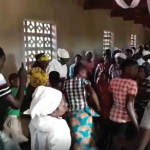