Our recent trip to Nunavut was SUPER AWESOME!

As usual there were a number of challenges – like Polar bears roaming the community, a furnace that was broken, and not enough helpers BUT GOD!!!  He always came through!!  The donated screen arrived the day before we needed it! Two heaters eliminated some of the cold in the church.

The movie we showed to the community was a blockbuster!! BREAKTHROUGH! A true story of a mother’s faith to raise her son from a death after he drowned. Many could relate! Even with nice weather tempting them to the land, 95 people showed up! The largest attendance we have ever had has been 60! When it was over, that group spontaneously stood to their feet clapping and praising Jesus in loud voices! Faith rose in the community and Jesus was truly honoured!! I believe there will be resurrections from the dead in Nunavut!

The weather changed from sunny to heavy downpours and high winds just as we started Vacation Bible School. That didn’t stop 48 children from coming out! The numbers grew until the last night when there were 90 children plus quite a few adults. I had heard that three hunters had not returned and the community was worried about their safety, so early in the meeting we asked the kids to pray with me for their safe return. Instant quiet and instant obedience! I was so impressed! Over an hour later, a young man ran into the church and told me the Search and Rescue had found the hunters safe!

When I announced that, there was a ROAR that split the air as the kids, yelled, whistled, clapped and rejoiced! It was so impacting! We all thanked God with all our hearts for this miracle. One of the hunters told me afterwards that in a dream he had, a person told him they couldn’t stay where they were. The next morning he told the men they had to start walking to a high mountain from which they could send a signal. 6 hours later, through cold and wet weather, as they topped the mountain, they saw the SAR canoes coming into the bay! They would not have been found in the other location!!! PRAYER IS POWERFUL!

AND GOD IS SO GOOD! SUCH FAVOR ON US! One church gave us an offering to help with supplies for the kids, the Co-op donated hotdogs for 110 people, the Northern gave me a discount on the juice, the Pickering Pentecostal church in Ontario donated a state of the art projector, sound bar, screen and dvd player for our use (without my solicitation), Lynn Valley church donated the VBS can and their left over supplies to us, Wendy graciously opened up her home to us, Leanne missed two weeks of work to come along and God gave her the smarts to be able to hook up all the new equipment!! He kept us safe from Polar bears when we were ignorantly walking in areas where they were! Suffering from a sore throat and laranjitis, He gave me power to finish strong! Daily He set up divine appointments where we could counsel and pray with people. People testified of healing miracles from the last time we were there. And after being fogged in and delayed for 2 days from departing, He helped First Air get a plane full of people in and us on our way home! And despite the fact I was behind schedule, I still was able to make a fast trip up to 100 Mile House to see my grandson and his family! Soooo cute!!!

In two weeks I will be leaving to minister in Estonia – after not being there for 8 years! I do so appreciate your prayers for His words and anointing to flow like a river in every meeting! 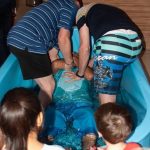 A Lifetime of LonelinessGlobal Stories 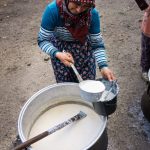 Where Do I Even Start?Global Stories