I just heard a testimony about a devout Muslim who started attending a church here because he was so concerned for the Christians who, in his opinion, were going to go to hell. After a few years he realized his efforts to convert them to Islam weren’t working, and somewhere along the way he met Jesus and realized that He was the true path to heaven!

Our God is so awesome.

“A man’s heart plans his course, but the LORD determines his steps.” Proverbs 16:9 May God confound the plans of others like this man who are convinced that Christ is NOT the way, and turn them 180 degrees so that their attempts to convert Christians end up in their own discovery of salvation through Jesus.

Let’s also pray for this man as he is now doing evangelism and discipleship but needs to develop some integrity as far as keeping his word and carrying out the plans God has planted in his heart. 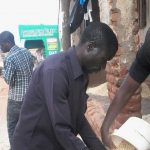 Give the gift of hope this ChristmasGlobal Stories